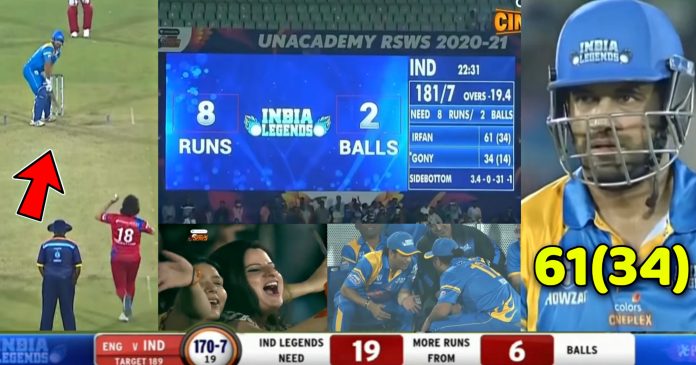 India legends might have lost to England legends, but not before putting up a fight. In a close game with edge of seat stuff, India lost by just 6 runs as they came within touching distance of victory. However, it wasn’t like this from the start. At one point, India looked down and out, dead and buried.

Irfan Pathan came to bat when Yuvraj Singh was dismissed. The score read 56-5 in the 9th over and India required a further 133 runs in just over 11 overs. With his brother Yusuf at the other end, the two began resurrecting the innings.

But as soon as it appeared that the innings gas been resurrected, Yusuf was out. It was a huge wicket at that point of time.

Soon, Naman Ojha was also gone. When MS Gony, the number 9 batsman came to the crease, India required 70 runs in 32 balls. It looked rather difficult to chase the target.

Irfan Pathan then went about taking India close to the target. Pathan started his onslaught at Kabir Ali. He hit him for a four and six in the 13th over.

Pathan then controlled himself before letting loose in the final 3 overs. James Tredwell came to bowl in the 18th over as Irfan was on the crease.

The first two balls were hit for two consecutive sixes and the next ball was taken for a single. the single brought his 50 a just 30 balls as Indian hopes increased with each lusty blows.

With MS Gony also hitting at other end, India required 19 more runs in the final over with Pathan on strike for the last over.

The last over was bowled by Ryan Sidebottom. The first two balls were hit in the vacant regions as Pathan ran 2 on both of them. The third delivery was hit in the air for a huge six which absolutely delighted the Indian fans and spectators.

With all eyes on him, Pathan could only hit a single off the fourth ball of the over. One more lusty blow from him could have finished the game, but Alas, it was not to be.

Pathan remained unbeaten at 61 off just 34 balls. He hit 4 boundaries and 5 sixes. His innings almost took India to victory but could not cross the final hurdle.

It was the Pathan of old which the fans were absolutely thrilled to see. He showed that he may have retired from international cricket but he still has got the skills and techniques to hit a few sixes.