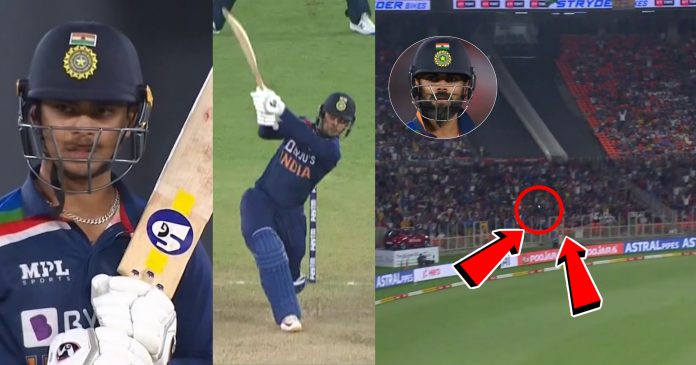 India are absolutely bossing the match in 2nd T20. Chasing a modest target of 165, KL Rahul got out cheaply. His poor form continued as he was dismissed for a duck. The other opener Ishan Kishan however looked set from the word go. Additionally, It never appeared that he is debuting in this game.

The first sign of Kishan’s free scoring spirit came in the 6th over. Tom Curran was bowling the over. it was a length ball outside off and right into the hitting zone of Ishan Kishan. Consequestly, the batsman just totally thrashed it over long on for a monstrous six.

It was a sign of things to come. The shot had ‘authority’ written all over it. Hence, at no any point, it looked that it was a hit by a batsman who is playing his first game.

Kishan did not stop there. On the third ball of the over, he spanked one through covers for a four and then the last bowl of the over was again smashed via point for another boundary.

The debutant hit his 50 in the first match by hitting Adil Rashid. It was the 9th over of the innings. Rashid was bowling to Kishan.

A full length delivery was hoicked for a six by the batsman. The next ball was even bigger shot for six as it was drilled over long on. The 50 of the batsman came when he thumped his second six of the over. It took Kishan just 28 balls to reach his 50.

However, he got out on the last ball of the over. The batsman tried to reverse sweep the delivery for a four but totally missed it. He was caught plumb in front of the wicket. the umpire adjudged him LBW.

Not satisfied with that, Kishan opted for review. But that review proved more to be just hope rather than an anticipation. Moreover, the ball was hitting the stumps and it was umpires call.

Ishan Kishan’s debut innings was cut short. Although, his innings made surt India don’t have any hiccups while chasing the victory as India coasted to victory. India’s decision to rest Shikhar Dhawan and play Ishan Kishan ahead of him proved to be fruitful one.