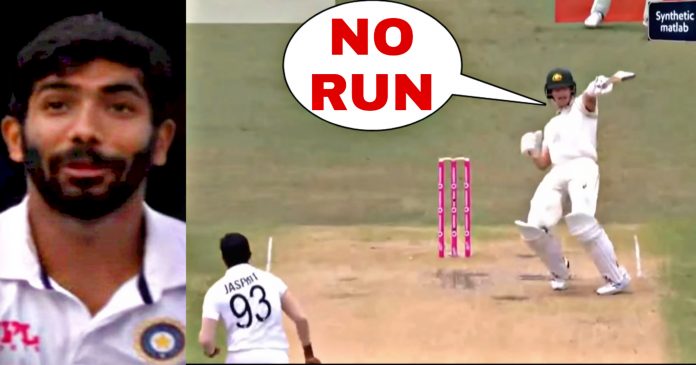 India and Australia fought out an epic test series that will go down the history books. Just when many thought test cricket is dying, the top sides in world cricket have produced one of the greatest test contests of all time.

Needless to say, this series has kept cricket purists on nerves since 2005 Ashes series. The four match test series saw cricket of the highest quality with many turns and twists. There has been no shortage of entertainment and the media coverage was immense.

However, the most funny moment came when Steve Smith did a weird reaction after playing out a dot ball in Jasprt Bumrah’s bowling. The Australian batsman is known for weird on field actions throughput his career.

His mannerism was particularly at this instance, even Bumrah saw the lighter note of it. Smith was caught on pads as he was looking for a single but the funny mannerism came when Smith told Hazlewood “no run”.

This will definitely be remembered by cricket fans across the world. Steve Smith played brilliantly for Australia in the last two matches. But he could not see his side clinch an epic win. Meanwhile, Bumrah was India’s spearhead in the first three tests as he looked lethal whenever he came to bowl.

India has tumbled records while playing as underdogs. That has been the story of the series ever since they were humbled at Adelaide Oval. But they came back strongly at Melbourne with a win.

Despite losing a plethora of stars, every Indian player contributed to the team’s success when called upon. Every day, the visitors had a different hero and it was a collective effort. In the process, India won back to back test series wins in Australia.

This series has been a great advert for test cricket after a long time. Many people are slowly moving away from the longest format but this series has brought back the attention to the purest form of cricket.

India are set to fly back home tomorrow and will rest for a few days. England are set to tour India from early February. They will begin with test series in what could be yet another mouth watering battle for cricket fans.