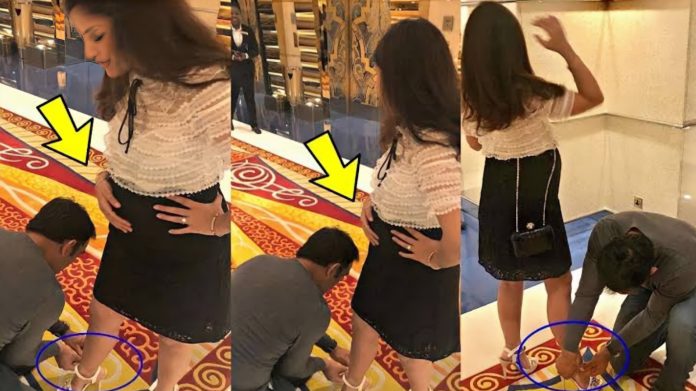 Sakshi Singh Dhoni is wife of the former Indian wicket keeper batsman and legendary player and captain Mahendra Singh Dhoni. Accordingly she is always under spotlight of Dhoni fans. Moreover she is one of the most active person on social media. Mrs Dhoni keeps updating about her life and family on Instagram and Twitter.

Recently Chennai Super Kings has uploaded a video on their twitter account. In the video, Sakshi Dhoni is getting asked about few pictures involving her and MS Dhoni. The first picture has a visual of Dhoni tying the straps of Sakshi’s sandle. When asked what was Dhoni doing in this, she replied :

It was Dubai and they had to go for dinner. While waiting for lift, her straps got loose. Then Dhoni said that he can tighten the straps quicker than her and he would do it. Hence, Sakshi agreed to it as Dhoni did what he said.

Dhoni has a new found habit!

Further Sakshi Dhoni revealed one more peculiar Dhoni habit. It was related to her husband’s addiction about PUBG, a popular mobile game. She said – You know Dhoni’s brain is always working. So when he plays any video game like ‘Call of Duty’ or PUBG, that helps in distracting his brain so it is a good thing.

Moreover she added – I don’t get irritated by the fact that PUBG has invaded my bedroom. Sometimes I think he is talking to me but then I realize that he is playing a game with his headphones on and saying something to his gaming partner over phone. At times he talks about PUBG even while sleeping!

Just a day ago, Dhoni has gifted his wife a vintage Volkswagen Beetle. The couple celebrated their 11th marriage anniversary. It was on 4th of July 2010 when the duo got married in the hilly region of Dehradun. Sakshi Dhoni revealed the gift in her Instagram story. ” Thank You for the anniversary gift” was the caption of the story. Moreover the vintage car ‘Volkswagen Beetle’ belongs to the era of 1930 and is sky blue and white in color.