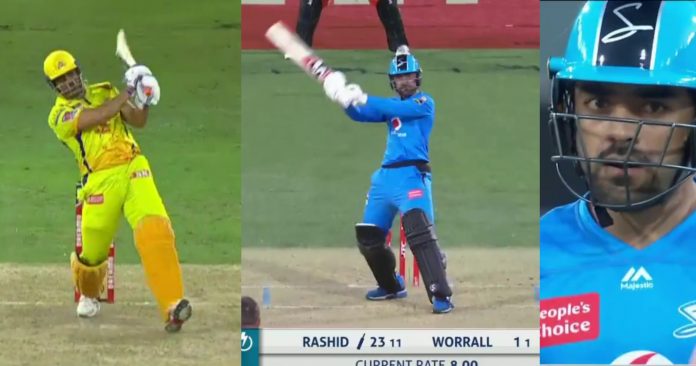 Afghanistan spin maestro Rashid Khan is one of the few cricketers who can play helicopter shot in modern cricket. In fact, it is one of the toughest shots to pull off while batting.

However, everything changed when MS Dhoni invented it. The helicopter shot has a special place amongst cricket fans and whenever someone pulls it off, the social media is set ablaze.

Rashid Khan has mastered various variants of helicopter shot in the last couple of years. He continued his brilliance by replicating the helicopter shot against Perth Scorchers. The 22-year old was sent in to increase the scoring rate and he did it in some style

Coming in at 110/5 at the end of 16th over, Rashid Khan upped the ante and set the innings on right track. He scored a quick fire 29 from just 13 balls. His innings featured 3 sixes and 1 four. However, the highlight of the match came during 19th over.

Andrew Tye was brought into bowl the 19th over. He bowled a full delivery outside the off-stump and Rashid Khan took maximum advantage. He stayed deep in his crease and hit a six just by swiveling his arms in Dhoni-esque helicopter shot.

We just love it when Rashid Khan brings his 🚁 to the BBL! #BBL10 | @BKTtires pic.twitter.com/6Eu2y1ieCK

The fans went into a meltdown watching Rashid Khan produce one of the toughest shots in cricket with ease. There was buzz all over social media about this shot. On the other hand, the day ended superbly well for Rashid Khan.

He delivered with the ball as well and picked up two wickets. In fact, he gave away only 18 runs in his 3 overs. But that should not be uncommon as he is probably the most economical bowler in T20 cricket.

Adelaide Strikers won the match comfortably as Perth could not put a fight. They were bundled out for a mere 94 handing a massive win for Strikers. For his impressive all round abilities, Rashid Khan was adjourned Man of the Match against Perth Scorchers.

Rashid Khan is slowly turning into a wonderful bowling all rounder. This will make even a better special player for Sunrisers Hyderabad when he comes back for IPL 2021.

Watch : Rishabh Pant found COVID positive in England. Could be out of the...