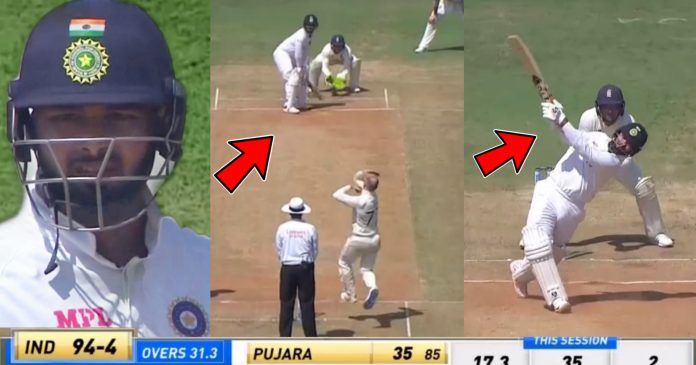 Indian cricketer Rishabh Pant once again proved why he should be in India’s starting lineup. The young keeper batsman came into the crease at a tricky situation when India were looking down the barrel.

After both Virat Kohli and Ajinkya Rahane were dismissed in a span of two overs, the onus was on young Rishabh Pant. Playing only his second test match at home, Pant took calculative risks to counter attack England bowlers.

He initially took on left arm spinner Jack Leach who was trying to get him out by bowling in rough areas. Pant stepped down the track and hit him for two sixes. As the innings continued, Pant became more aggressive and made the runs flow.

His continuous onslaught of Leach had made Root take him out of bowling and bring others into action. Be it spin or fast bowling, Rishabh Pant was able to play calculative shots. He did not look to get out as his shots were so pure at times.

Pant continued to take on any bowler as Cheteshwar Pujara blocked one end. The duo went onto make a hundred run partnership as they steadied the ship. However, Pujara got dismissed in an unusual fashion which opened doors for England.

The southpaw continued to play the innings like he usually does. But he showed more restrained and respect to few bowlers. After making a blockbuster 91, Leach got the wicket of Pant as the young cricketer missed out on yet another hundred.

Watch what happens when @RishabhPant17 decides to take on Jack Leach. The Indian batsman hits four sixes in his three consecutive overs.

Pant has once again played a brilliant knock but there is always a desire for more both from the fans and experts. He is so good when he is going and makes test cricket exciting.

After his dismissal, both Washington Sundar and Ravichandran Ashwin managed to see out the day. India should now look to play as long as possible and bring the deficit to less than 200 to stand a chance to avoid defeat.

The visitors are firmly on top and will look to continue doing the things that worked for them in the first 3 days. Another exciting day’s play awaits as fans hope for India’s resilience which has been the character of the team in recent months.