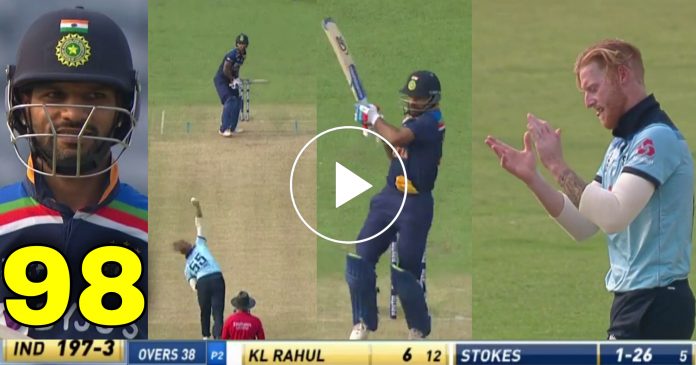 Indian Opening batsman Shikhar Dhawan was out for 98 in the first ODI, of the three match series. Dhawan was dropped from the T20 series, after a poor outing in the first game. Also, he does not play tests anymore. With his place in jeopardy in Indian team in ODIs, this knock was too important for him.

Earlier, England captain Eoin Morgan won the toss, and elected to field first. The decision was not that great for Englishmen. The Indian openers Dhawan and Sharma added 64 runs for the first wicket, but were a bit slow for that. They took 15 overs to do it.

Rohit was dismissed by Stokes when he tried to cut a, short and wide delivery. The edge carried to the keeper who made, no mistake. Enter Virat Kohli at number 3.

Kohli carried on his pristine touch from the T20 series, and along with Dhawan added 106 runs, for the second wicket. Both looked in great touch, and were looking good for more. But, Kohli was gone after hitting 56. Shreyas Iyer followed suit as, he was gone for a single digit score.

With two wickets falling quickly around him, Dhawan got itchy despite, being batting beautifully till now. Consequently, this desperation of him lead to his downfall. Stokes who bowled the 39th over delivered, a short ball to Dhawan. The batter tried to pull it, but could not keep it on the ground. The shot was taken by short mid wicket fielder, who was the English captain Eoin Morgan.

The opener made 98 runs in 106 balls. It included 11 fours and two sixes. He might have missed out on a 100, but made sure that still he plays an important knock. A failure in this innings could have, put his international career in danger, but not anymore.

With the dismissal, Dhawan failed to get to a well deserved hundred. Also, his departure meant that India is now struggling. A score of 330 looks all the more difficult for now. To challenge a strong English batting line up, a good target is necessary.

Watch the video of Dhawan getting out for 98: