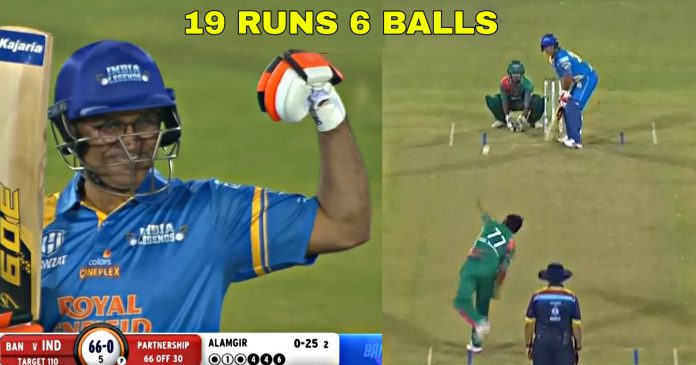 Virender Sehwag turned back the clock in style in the inaugural game of Road Safety league. He smashed 19 runs off the opening over bowled by Mohammad Rafique.

Bangladesh batted first but got bowled out for 109 without playing their 20 overs. Nazimuddin scored 49 and was the highest run scorer for his team. For India, Vinay Kumar picked up 3 wickets

In reply, Sachin and Sehwag opened the innings for India legends. Additionally, for Bangladesh, the captain and spinner Mohammad Rafique started the bowling.

However, Sehwag turned back the clock in some style. He started by whacking 19 runs off the first over. Sehwag went 4,4,6,0,4,1

The first two balls were flayed through covers. The next ball was hit over long on in a typical  Sehwag fashion. A dot ball followed while a four was hit on the fifth ball. Moreover, Sehwag then took a single off the last ball to retain strike.

This start by Sehwag confirmed that he may not have been playing cricket at international level, but he still has the same flair and temperament which the bowlers feared.

This series was originally planned last year. Consequently, four games were played in the tournament. However, due to COVID 19, the tournament was postponed.

India is being led by master blaster and little maestro Sachin Tendulkar. Almost all of India’s former players are playing in this tournament. This includes, Sachin Tendulkar, Virender Sehwag, Yuvraj Singh and the Pathan Brothers. The list also includes Vinay Kumar, Munaf Patel and Manpreet singh gony alongside Pragyan Ojha.

All the matches of this tournament will be played at Shaheed Veer Narayan Singh international stadium.