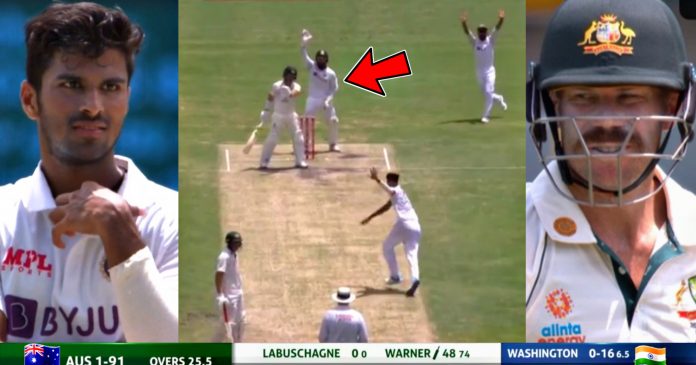 Australian opener David Warner was finally in form after failing in his first three innings in this series. However, his innings was cut short by Indian off spinner Washington Sundar.

Sundar was able to dismiss him through LBW as the southpaw was drawn into the shot. Warner was brilliant with the bat and helped accelerate the scoring rate for Australia in the second innings.

But he will be gutted to not convert the brilliant start he made. Warner managed to get 48 runs in his stay but ensured that Australia picked up the scoring. He along with Marcus Harris put on a solid 89 run partnership.

India were able to get back into the game by dismissing both the openers in quick succession. But the hosts are looking to make quick runs to force India to bat for as long as possible.

Warner, on a personal note, would be disappointed about this series as a whole. He looked so out of form after coming back from an injury. On the other hand, Washington Sundar continued his dream run in his debut match.

After picking up 3 wickets in the first innings, Sundar came out to bat and helped India reduce the first innings deficit to a mere 33. He is proving to be a quality all rounder and it wouldn’t be surprising if he is picked for the next test series against England.

He bowled tight lines to Harris and Warner. Eventually, he was awarded with the wicket of David Warner for his efforts.

The pressure is on Australia to win this test match. The hosts are overwhelming favorites after India lost more key players before the start of Brisbane test. Australia are trying to get the runs quickly to force a result on this test match.

Mohammad Siraj has been lively in the second innings. Indian bowlers in general are doing a brilliant job. It will be interesting how Australia approaches this game if they lose couple more wickets.

All in all, this is a fiercely contested cricket series and each team deserves this trophy. But as we have seen all three results are possible in this final test. Rain has been predicted so draw cannot be ruled out of favor.