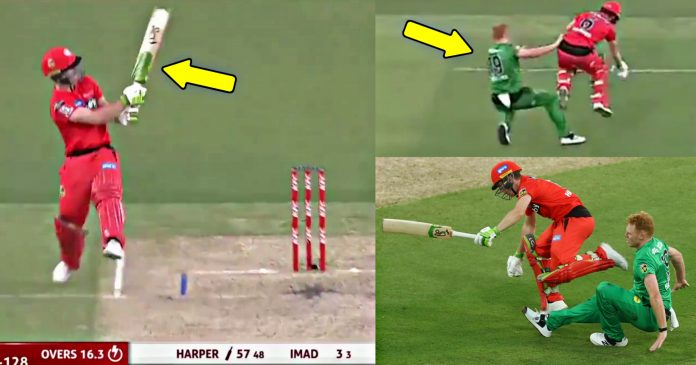 Melbourne Renegades wicketkeeper batsman Sam Harper was once again involved in a nasty collision in their match against Melbourne stars. The 24-year was trying to sneak in a run during which the incident took place.

Harper had tried to scoop Hatcher over short fine leg. However, Hatcher managed to bowl the ball well outside off stump. Sam Harper failed to execute the shot and was only able to scoop to near the stumps.

He charged for the run looking at the ball. Hatcher also did the same as they were ball watching. The duo who eyes were on the ball collided and both fell down awkwardly. Harper was quick to recover as he was trying to get back into the crease.

Billy Stanlake who got the ball did not throw the ball to run out Harper. It was a great act and he upheld the spirit of the game. Meanwhile, Harper scrambled for his single run and came back to check on Liam Hatcher who was still lying on the ground.

Fortunately both the players were okay and it was all good at the end of the day. Incidentally, Sam Harper was involved in collision with Hobart Hurricanes pacer Nathan Ellis last season.

Melbourne Renegades have lost their way in the Melbourne derby after choosing to bat first. Sam Harper was the star of the innings with his 63 run knock. However, he got little support from other batters as Renegades could only score a below par 150 in 19.5 overs.

Pacer Liam Hatcher was the pick of Stars bowlers as he picked up 3 wickets in his bowling quota. During the chase, Renegades were able to dismiss dangerous Andre Fletcher early. But Marcus Stoinis along with Nick Larkin put Stars in a winning position by the time they were dismissed.

Stars finished the chase in the 20th over but could not win big boost point. They are currently second in BBL table only behind Sydney Sixers after this win. But Renegades need to check their team formation as they continue their poor run of form.

It was the Renegades’ ninth defeat in 11 games this season. The BBL 2020 is quite exciting this season as only four points separate the teams from 2 to 7 in the table.

Watch : CSK player Krishnappa Gowtham gets a wicket in first over