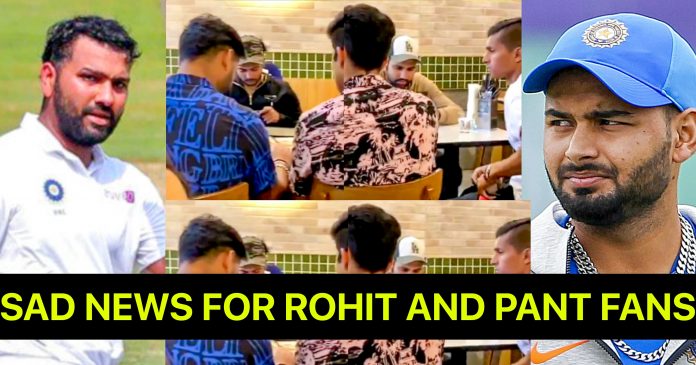 Rishabh Pant and Rohit Sharma were amongst the players who have potentially breached the bio bubble restrictions. The players were out to dine out at a restaurant. However, the rules suggest they can eat out at restaurants but they have to do it outdoors.

However, as per the latest reports, the cricketers have met a fan during their restaurant and the players interacted with him. It is also further claimed that the fan paid their bill too.

The fan, by the name of Navaldeep Singh, paid their $118 dollar bill for the cricketers when he met them at Secret Kitchen Chinese restaurant at Chadstone Shopping Centre. He has reportedly clicked selfies with the Indian cricketers and even hugged wicketkeeper Rishabh Pant.

Both BCCI and Cricket Australia were alerted on the situation. The boards are investigating on the matter. CA have put in strict restrictions on both the teams to minimize the risk of corona contraction.

The board have fought hard to keep the test series going in Sydney in the wake of new strain in Australia. However, despite the reports nothing came out on social media to prove that Indian players actually breached the rules.

But BCCI are investigating into the controversy. The players were seen indoors despite the rules suggesting to dine outdoors. Meanwhile, Cricket Australia also did not comment or release a statement on the incident yet
WATCH VIDEO

India are still in Melbourne and are set to reach Sydney on January 3. Earlier a similar incident happened with Brisbane Heat players Chris Lynn and Dan Lawrence. Both of them took a selfie with a fan. Cricket Australia levied a hefty fine to both players and Brisbane Heat.

India Gearing Up For Sydney Test

The return of Rohit Sharma is a huge bonus for India ahead of third test. However, fast bowler Umesh Yadav is ruled out for the rest of the series. Natarajan and Shardul Thakur are roped in as replacements.

The preparations are in full swing as the team continued their practice sessions. The third test will begin on January 7. Meanwhile, the situation on the final test at Brisbane is not yet conclusive.

The recent corona cases in Victoria is jeopardizing the situation. However, the Queensland government is yet to close the border with Victoria. A conclusive decision could be out by January 8. Even Indian players could be tested to ensure safety going into the test match after this incident.