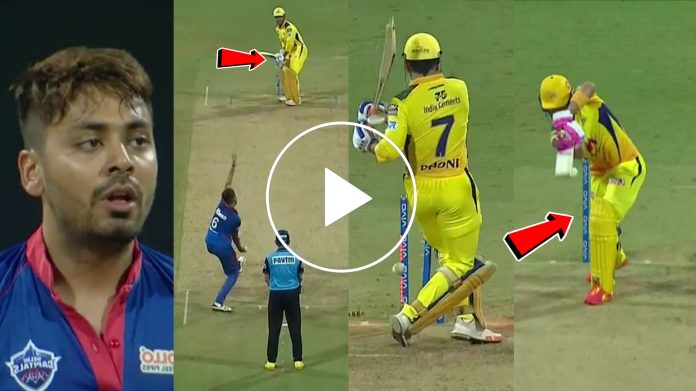 In the last few months, Indian cricket has seen the emergence, of a lot of new fast bowlers. From Shardul Thakur to Mohammad Siraj to T Natarajan, the fast bowlers have come out, with intent. In their initial series, they have turned the matches on its head, like a seasoned campaigner. After watching, the second game of the IPL, one can say that a new fast bowler is soon, going to join the list.

The name of the bowler is Avesh Khan. Marked, as the pacer to watch out for since his under 19 days, Avesh finally came into his own. The right arm pacer, from Madhya Pradesh shared the new ball with, Chris Woakes vs the Chennai openers.

His first victim was veteran, South African batsman Faf Du Plessis. Bowling, the second over of the innings, Khan struck with his fourth delivery. A pacy incoming, delivery from the bowler at 140, pinned Du Plessis on the pads. As soon, as the appeal came, the hands went up from the umpire.

Avesh Khan gets Faf and Dhoni!

Such plumb was the dismissal, that Faf did not bother even, to consider a review. The decision of giving Khan, the new ball proved to be the right decision. However, it was the second wicket of Avesh Khan that, truly set him apart on the night.

His other victim was, none other than the skipper of Chennai, Mahendra Singh Dhoni. Brought, into bowling the 16th over, the first task of Khan was to stop Dhoni, from hitting him into submission. Something, that Dhoni has done expertly in all those years of his India career. However, Khan went much better than that.

The quick bowler bowled, a hard length as MS Dhoni looked to pull him, for a boundary. But the ball arrived a bit, later than Dhoni imagined. The next thing, was that he had his stumps rearranged. Avesh Khan, had his second and the most important wicket of the opposition team. He celebrated this achievement, by pumping his fists and letting out a roar.

Avesh Khan finished, with good figures of 4-0-23-2. He was the only bowler from Delhi, to have gone for less than 6 runs an over.