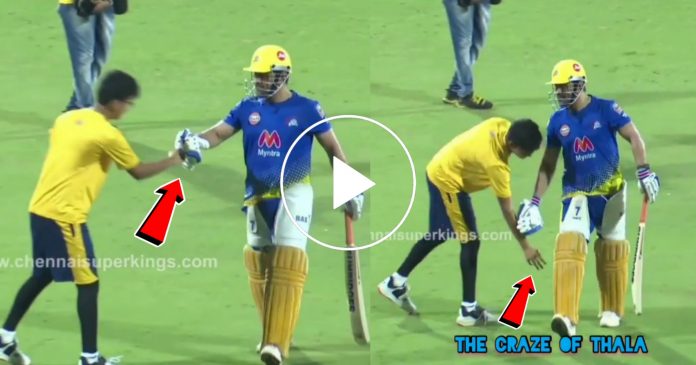 MS Dhoni enjoys a cult status in Indian cricketing circles. He is regarded as the best captain India has ever had. One of India’s finest middle order batsman, a proven finisher and his ability to seize decisive moments makes him an irresistible force in cricket.

This peculiar trait of Dhoni has earned him millions of fans and supporters not only in India but also outside of it. His fans wait with baited breath whenever he bats. From the time he announced his entry to international cricket with a blistering 148* against Pakistan back in 2005, to his bowing out of international cricket in 2020 is a stuff of folklore.

Lovely and heart touching gesture by a fan

One such moment which has gone viral in last few days is from a video. This video is about Dhoni training in the nets under the lights. The training is from the Chennai Super Kings camp where they are preparing for Indian premier league.

The former Indian captain and current Chennai captain Dhoni can be seen practicing in the nets. Different bowlers come and bowl at him and he plays all of them easily. After a while, he leaves the session and start going away from the nets.

That is when a young boy comes wearing spectacles. He comes towards Dhoni, looks at him and smiles. Then he is seen tapping his hands with the boy. After that, the boy just bends down and touches the feet of MS Dhoni out of respect and adulation as Dhoni smiles.

It was an actually beautiful moment of fan with Dhoni. Even after leaving cricket for more than a year and half, fans of the ex captain still wants to see him. In the 21st century, only Sachin Tendulkar and Virat Kohli can rival the fans which Dhoni has earned. No one can come even close to it.

As a captain, Dhoni has won India three ICC tournaments. A 50 overs world cup, a 20 overs world cup and a champions trophy to boot. Also, Dhoni has taken India to the top of test ranking and made India the number one ODI team as well. This is one of the many factors which has contributed in Dhoni’s legacy.

Watch the moment of Dhoni here: