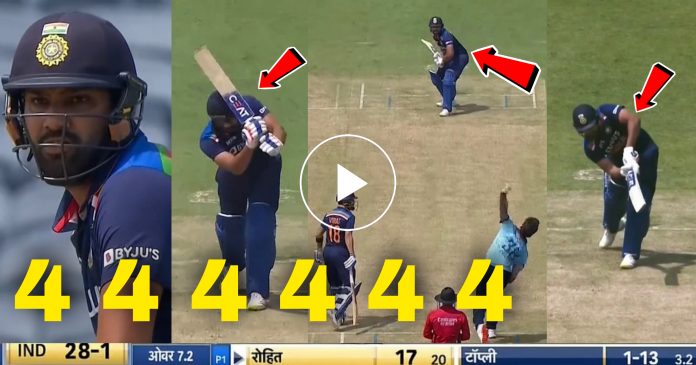 The second ODI between India and England is underway. The match is being played at Maharashtra Cricket Stadium, Pune. The first match was also held here in which India won by 66 runs. Chasing a target of 318, England crashed to 251 all out as India took a 1-0 lead in the three game series.

Just like the first ODI, England won the toss. For England, the regular captain Eoin Morgan is missing due to injury while middle order batsman Sam Billings is also not playing due to shoulder injury. Jos Buttler takes the place of Eoin Morgan as stand in captain while Liam Livingstone makes his debut for England in place of Sam billings.

Also, Mark Wood is rested and Reece Topley takes his spot. India has made just one change in this game. The injured Shreyas Iyer is out and Rishabh Pant takes his spot in the playing 11.

The Indian innings started on a somber note. Man of the match in last game, Shikhar Dhawan was dismissed cheaply at individual score of four. He edged one to second slip to Ben Stokes off Reece Topley. Virat Kohli came at number three.

Meanwhile, Reece Topley came to bowl in his next over. It was the seventh over of innings. The first ball of the over was flicked to mid wicket for a four. It was a typical Rohit Sharma stroke. The second was was a dot.

Third ball of the over was again a short and wide as it was spanked for another boundary by Rohit. The next ball was again a dot.

Fifth ball of the over was dug in short and it was pumped over midwicket for third boundary of the over. Last ball was again a dot in this over.

It was a unique over in which every four was followed by a dot ball. The sequence read 4,0,4,0,4,0. Twelve runs came off the over as Rohit looked in pristine touch.

However, Rohit was dismissed soon after playing such shots. Unfortunately for him and the Indian fans, he swatted a ball on his pads straight into the hands of short mid wicket. Rohit made 25 in 25 deliveries before getting dismissed. It is the second successive match in which Rohit is out after getting set.