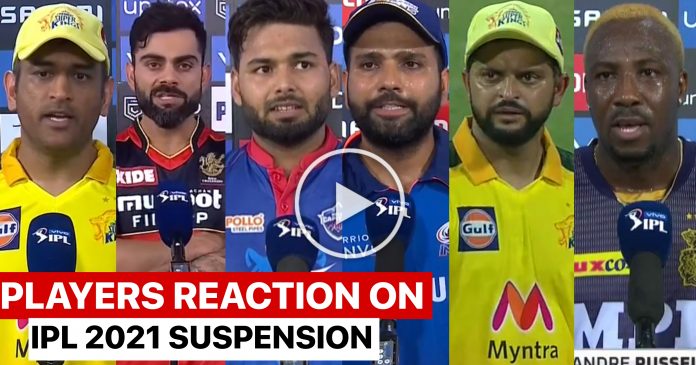 The suspension of IPL has come as a shock to some and disappointing for some. The bio bubble was breached and players, from at least four franchises were found affected by COVID. Hence, this season of IPL has been postponed until further notice by the BCCI.

Only about half of the tournament, was completed and almost half, of the tournament was still to be played. But now, with the postponement of this edition, the news isn’t great for any cricket and IPL fans. As of now, the biggest challenge for the BCCI is, to send the overseas contingent of the IPL, safely back to their home.

The players are from South Africa, Australia England, New Zealand and West Indies. A couple of players are from Bangladesh as well. After the IPL has been postponed, the reactions from cricket fraternity is pouring in. Be it the ex players or the current players, most of them have given their reactions on social media.

Some players have expressed disappointment over the news. While, some have appreciated the fact that IPL has been postponed. Some of the tweets are as follows

UPDATE: The Indian Premier League Governing Council (IPL GC) and Board of Control for Cricket in India (BCCI) in an emergency meeting has unanimously decided to postpone IPL 2021 season with immediate effect.

India – it’s heartbreaking to see a country I love so much suffering! 😢

You WILL get through this!
You WILL be stronger coming out of this!
Your kindness & generosity NEVER goes unnoticed even during this crisis! 🙏🏽#IncredibleIndia ❤️

I guess it became inevitable in the last couple of days…..Look forward to calling the action in happier times. The #IPL is a great event and I hope it returns stronger when the world is what we knew it to be

The postponement of the IPL will be a huge disappointment to so many people but health and safety surpasses everything else in importance. This horrible virus doesn’t discriminate and even the strictest biosecure bubbles aren’t foolproof.

Covid don’t care.
It has no favorites.

Get well to those sick and hopefully everyone else will get home safe and in good health.

Let’s fight it out🙏

The only good news that, has come today regarding the IPL, is from the member of IPL governing Council, Mr Rajiv Shukla. He has said that IPL 2021, has not been cancelled but, has only been postponed. It will be played at a later date on suitable time and venue.

What if the situation doesn’t improve in India

The next International series for India, is scheduled in England. There, they will play 6 test matches. The first one, will be against New Zealand. It will be the final of world test championship and will be held from 18th June.

After that, India will play against England. It will be a test series of 5 matches. Then, in September there was a world T20 event, which was scheduled in India. However, with the IPL now getting postponed, and the COVID situation not likely to get improved, there is a little chance of World T20 happening in India.

In that case, the BCCI has already opted UAE as the optional value. Also, the remaining portion of IPL, might happen right after the World T20.

Now, the immediate concern of BCCI is, safely transporting the overseas players back to their countries. Also, thinking about the possible venues and time, where the home matches of India would be played, if the situation of COVID 19 doesn’t improve in the next few months.