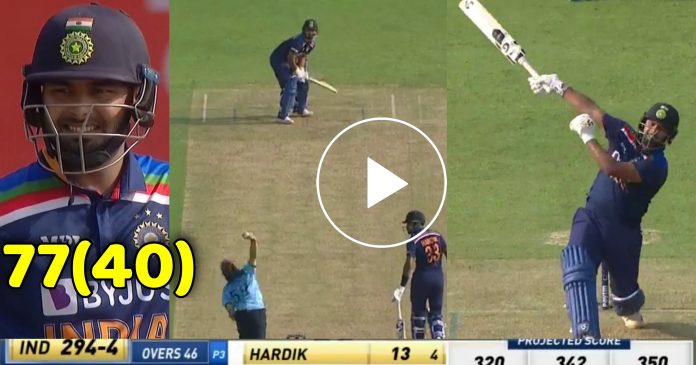 Rishabh Pant’s is in the form of his life. In the last few months, Pant’s fortune has sky rocketed to another level along side his run making abilities. He made match winning contributions in Australian test tour of India and then the test series vs England at home.

After stupendous performances in test series, Pant was selected in the limited overs team as well for India. He did not disappoint in T20 as well as his good batting in T20 was a major contributor in India’s victory by 3-2 in the T20 series.

Now Rishabh Pant has got a chance to play in the second ODI vs England ahead of injured Shreyas Iyer. Pant grabbed the opportunity with both hands. He has blasted 77 runs in a mere 40 balls that includes seven monstrous sixes! His innings is the reason why India is all set to score more than 330 runs in the second ODI.

The south paw came to bat at the fall of wicket of Indian skipper Virat Kohli. Kohli made yet another fifty before getting dismissed by Rashid. India was looking to accelerate the innings in the mid phase after the partnership between Rahul and Kohli too India to stability.

Pant started slowly as he took a bit of time to settle. However, once he was set, it was carnage for England. His first big hit came on his 15th delivery when he slogged Adil Rashid for a humungous six over long on. This was just the start and sign of things to come.

One more boundary followed in the next over as Stokes came in to bowl the 41st over of the innings. After that, there was no stopping Pant. Stokes was hit for two successive sixes. Curran was thumped for a six and a four in the next over. He did not stop there as Curran and Stokes one again conceded sixes to Pant in the next two overs.

But when it appeared that Pant would hit a century, he was out trying to slice a six over extra cover. He was caught at third man by Roy off Tom Curran. Pant finished with 3 fours and 7 sixes in his 40 balls.

Watch the innings of Pant here: