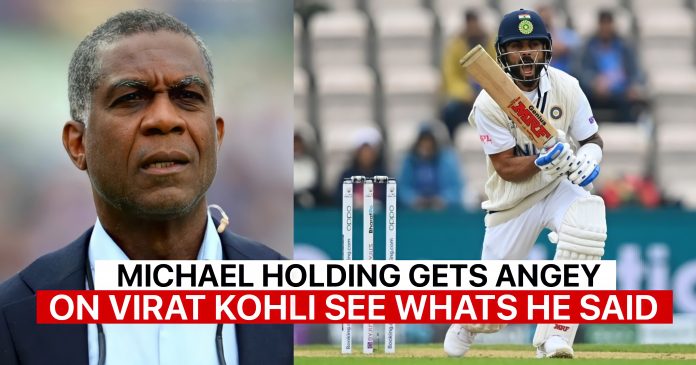 A lot of fans were left disappointed by the way India lost the finals of the World Test Championship. It was expected to be a close contest between the best two teams of the championship cycle. However the Indian team lost by 8 wickets in the final session of the match. Moreover the rain had threatened to play a spoilsport in the match. Accordingly, the match was moving towards draw as it washed away close to 2.5 days of the match.

However, on the final day of the match, New Zealand bowlers were unplayable. Hence, India lost the plot and were bundled out for 170. From there on, it was New Zealand all the way. The Kiwis easily chased down the modest target of 139 with relative ease.

After the match, a lot of former players had their say on the match. Many of them criticized the way India batted on the final day. Also, some praised the Kiwi bowlers lavishly for their outstanding bowling. In a similar line, former West Indies great fast bowler and current cricket commentator Michael Holding came up with his statements in the backdrop of India’s loss.

Holding isn’t impressed with Kohli’s antics on the field!

While speaking with Indian Express, Holding said – “Virat Kohli is someone who wears his heart on his sleeve. He’s someone who will let you know exactly how he feels. I think he gets a bit carried away at times, but that is Virat Kohli, that is the man.”

Holding then compared Virat with another legendary batsman and his former team mate Sir Viv Richards. Holding added – “He’s similar to Viv in that regard. Viv, sometimes on the field, was over-expressive. But those are the personalities of those two gentlemen. They can tone down a little bit as well, but then, if you are a Mustang, it’s hard to tell a Mustang to trot. He’s going to gallop.”

The former 67 year old pacer from Jamaica also voiced his opinion on the captaincy of Virat Kohli. He said – “As far as his captaincy, I’ve only seen India when they were touring England and I saw them in South Africa. The only thing I’d say about Virat is that he tone down a bit so his team can relax because a lot of them, I think, are on tenterhooks.”

A 5 match series vs England –

Indian test team’s next assignment will be a five match test series vs England. In the series, Virat Kohli and company will look to bounce back after the disappointing result of the World Test Championship. Moreover, India has had horrible returns in England for the last three times they have played there.

First test between the two teams will start from 4 August.