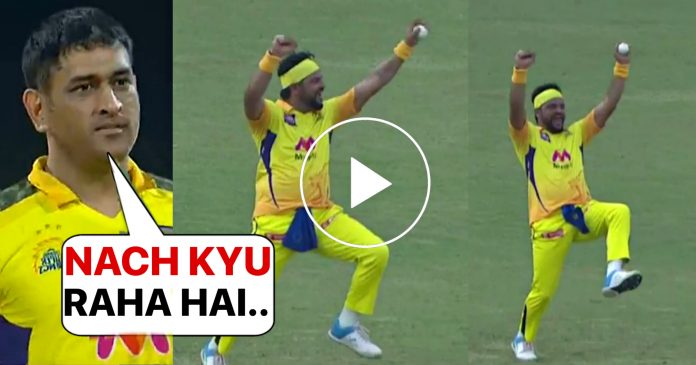 Chennai Super Kings are now, the table toppers of the Indian Premier League. They smashed, Royal Challengers Bangalore by 69 runs. For Chennai, Ruturaj Gaikwad made 33 runs and Faf Du Plessis made 50 runs. Suresh Raina made a sparkling 25 in just 18 balls. The south paw hit 3 sixes in his brief stay. He was dismissed by Harshal Patel. Meanwhile, Faf Du Plessis reached his 50 at the other end. It took him 40 deliveries to reach the landmark. However, he was out next ball after hitting his 50. His wicket was also taken by Harshal Patel when, the batsman tried to launch him for a six.

In the end, Ravindra Jadeja played an innings of lifetime when he whacked 62 runs in just 28 balls. His innings had 5 sixes, all of which came in the last over. Jadeja pulverised Harshal Patel, for 37 runs in the last over, beating the bowler to a pulp.

Co-incidentally, Harshal Patel was the most successful bowler for Royal Challengers. He picked 3 wickets in his four overs, before that wretched last over ruined his figures. Ultimately, he finished with 4-0-51-3.

In reply, Bangalore could only make 122. None of their batsmen, could make a solid contribution. The only one to make solid runs, was Devdutt Padikkal. He, smacked 34 runs in just 15 balls. The youngster from Karnataka whacked 4 fours and 2 sixes.

He was dismissed, by Shardul Thakur. The bowler, bowled a short ball to the batsman who played a pull shot. However, the shot was mistimed and he was taken, at square leg by Suresh Raina.

As soon as Raina took the catch, he started to dance in a funny way. He did, some what of a bhangda step. It was a hilarious moment. Everyone started to laugh, at that moment.

After the wicket of Padikkal, the innings of Bangalore collapsed, as Chennai won the match.

Watch the video of Raina’s catch and dance:

Watch : Surya Kumar Yadav unbelievable incident. Umpires call him back after giving out.

Watch emotional statement of KL Rahul after a one-sided loss