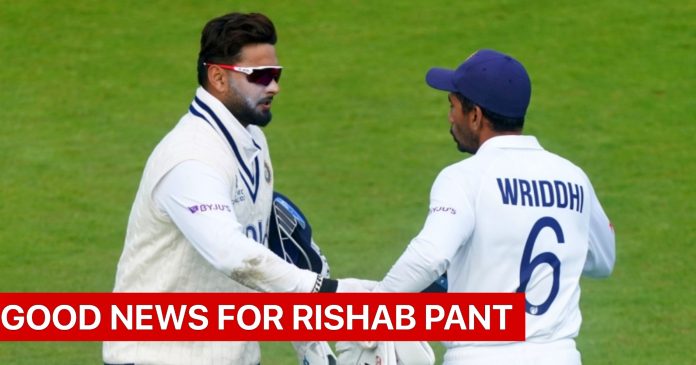 Star Indian wicket keeper batsman Rishabh Pant has been found COVID negative in the recently concluded RT-PCR test. It comes as a fantastic news not only for the Indian fans, but for the team management as well. The left hander Pant is expected to play a key role in India’s test series vs England that will be played over 5 tests.

Earlier Pant was found COVID positive around 5-6 July. It is believed that he got the virus when he visited a dentist in London. Interestingly on the next day which was 7th July, all the Indian players were given the second dose of vaccine making them fully vaccinated. However by that time Pant had already been infected by the Virus.

After getting infected by COVID, Pant was forced to stay in isolation for 10 days. Moreover Wrddhiman Saha and Abhimanyu Easwaran who were in close contact with him were also forced to enter into Quarantine. Furthermore all the three players were not allowed to enter in Indian team bio-bubble.

The Indian team entered in the bio-bubble after a gap of 20 days on 14 July. All the players went through mandatory RT-PCR tests twice and returned negative results. Hence while Pant stayed back in Durham at his relative’s place, all the other test team members began to prepare for the upcoming grueling test series.

Meanwhile the Indian team is all set to play a practice game against select county 11. It will be a 3 day game and both teams will clash each other at the riverside ground in Durham. Also, this would be the last practice game for India before the start of first test against England from 4th August.

While Pant would not be available for the practice match, KL Rahul is expected to take over the wicket keeping responsibility in his absence. Rishabh Pant can only join the Indian team’s bio-bubble after another RT-PCR negative result. Hence, the left hander should be able to unite with the national team on 21st July.

The first test between India and England is scheduled to begin from 4 August at Trent Bridge. India will look to win the series in England after a gap of more than 14 years. The last time they won a series in England was in 2007.