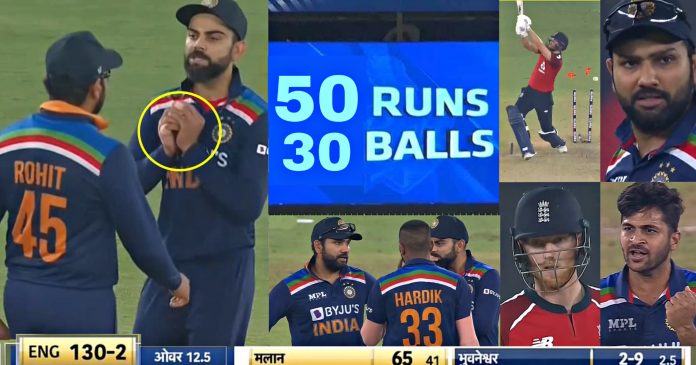 India have won the last T20 match by 36 runs and they win the five match series by 3-2. This is India’s second successive series victory in which they have come from behind to take the series. In the test matches as well, India won the series after losing the first test by 3-1. Here also, India lost the first T20 but now have come from rear to seal the series 3-2.

Earlier, England won the toss again and elected to bowl. The aim was to make the full use of the dew which comes at night. However, India spoiled the English plan in some style.

India off to a flyer

The Indian openers were Rohit Sharma and Virat Kohli. KL Rahul who had a horrible run in the first four matches, was dropped as Kohli took his place in opening. Both of them totally demolished England in the powerplay. Consequently, they took the score to 60-0 in six overs. Moreover, Rohit was severe on any thing short as he hooked and pulled mercilessly for sixes.

It was Rohit who accelerated the Indian innings as Kohli played second fiddle to him. The Rohit ‘man’ Sharma completed his first 50 of the series. He hit four sixes and 3 fours. Rohit was back to imperious best. He looked set for more but a slower delivery from Stokes cut his innings shot. He was bowled while trying to pull.

Next man in, Surya Kumar Yadav carried on from his last man of the match performance. He kept the run rate to where Rohit had left. His cameo of 32 in 17 balls led India close to 150 in just 14th over when he was dismissed. It took a sensational relay catch by Jordan and Roy to dismiss him.

Virat Kohli and Hardik Pandya then took over as both of them blasted the English bowlers to all parts of the ground. Pandya remained unbeaten on 39 in a mere 17 balls and Kohli again was not out making a 52 balls 80.

India smashed 224-2 in 20 overs setting England a target of 225 runs in the deciding game.

England wilt under a huge target

Chasing 225 to win, England got off to a start in exactly the opposite way they wanted. Jason Roy who had looked in all series was cleaned up second ball by Bhuvaneshwar for a duck. However, that was the only wicket India would get for the next 10 overs.

Jos Buttler and Dawid Malan then took the attack to Indian team as they joined to add 130 runs in just 62 balls. Both of them had no any problems in dealing with the bowlers as they got boundaries and sixes at will. They put the pressure on bowlers as the dew came in full flow.

Both of them got their respective 50’s at a pretty quick pace as England looked neck and neck with India at halfway stage. It was at this stage that the bowlers stood up to the task. First, it was Bhuvaneshwar who had bowled brilliantly in his first two overs who removed Jos Buttler and broke the dangerous partnership.

This was just the moment India required as they totally took over the game from there. None of the English batters who came after that could cope with the required run rate and kept losing their wickets in almost every over. At the end, they could only finish at 188-8. Dawid Malan was the highest scorer for England as he made 68 runs in 46 balls.

For India, Bhuvaneshwar Kumar was the most economical of the bowlers as he returned with figures of 4-0-15-2. On a batting paradise, it was a match turning spell. This proved decisive in the end.