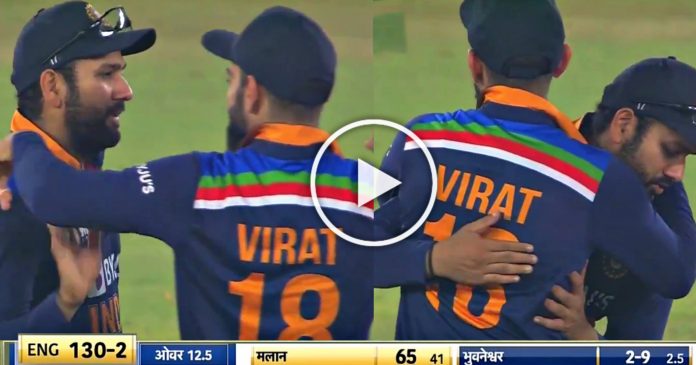 India won the last and deciding match of the five match T20 series by 36 runs. With this win, India have now set the record of being unbeaten in 9 T20 series. This includes victory in 8 T20 series and one was tied.

Batting first, India made 224-2 in 20 overs. Rohit Sharma and Virat Kohli opened the innings and added 94 runs in little more than 9 overs. Rohit made 64 runs and hit 5 sixes in that. Also, Surya Kumar Yadav made 32 in 17 while Pandya finished with 39* in 19 balls.

Captain Virat Kohli remained unbeaten at 80* off 52 as India reached 200 for the first time in this series.

Chasing 225 against a quality bowling line up of India was always going to be tough. More so when the Englishmen lost their first wicket for nought in the form of Jason Roy.

After that, Jos Buttler and Dawid Malan stuck in and added 130 runs in just 10 overs as they kept the game alive. However, Bhuvaneshwar once again took the wicket of Buttler, thereby breaking the partnership between the two.

As soon as Buttler fell, the English challenge too fell like a pack of cards as wickets tumbled in heap. Malan soon followed as did Bairstow and Morgan who fell for single digit scores.

The match had almost died as a contest when Morgan was out, but it totally got killed when Ben Stokes too was out. After that, there wasn’t much in the match as India sealed a 36 runs victory.

However one of the interesting moment of the match happened after it ended. The Indian players were shaking hands with each other as well as hugging. One after another, most of them hugged and congratulated each other for winning the series.

One such moment was Indian captain Virat Kohli and vice captain Rohit Sharma hugging each other and patting. There is a section of Indian fans that believe in the news of Rohit and Virat not gelling with each other. A lot of people believe that the two don’t talk with each other. None of them has confirmed the news but then, haven’t termed it as rumour either.

Both keep saying that the two have immense respect for each other and they do what the team needs and for the betterment of the team.

This clip of Kohli hugging with Rohit once again confirmed that there might be some truth in the news of two not in talking terms with each other, but then when it comes to the team, both are ready to forget their personal differences and are ready to gel for the team.