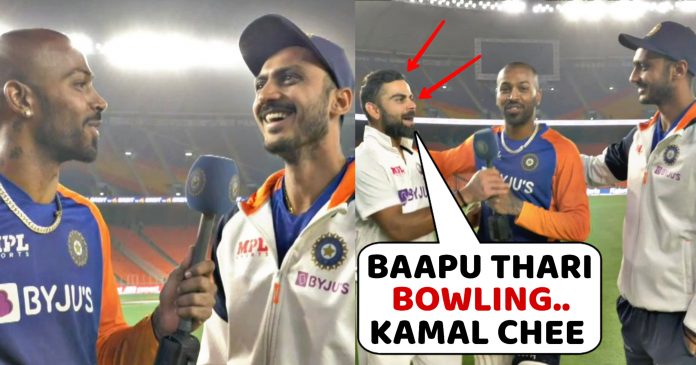 India won the third test against England in some style. They thumped the English team by 10 wickets to go 2-1 in the for match series. With this win, India have moved a step closer to reaching the finals of the WTC. Just a draw in the next test will see them get through the finals where they will meet New Zealand at Lords in June.

Earlier in the game, the spin duo of Axar and Ashwin combined to roll over England for 81 in their second innings. The spinners shared 9 wickets between them with Patel picking up 5 wickets while Ashwin took 4 wickets.

Axar returned with match haul of 11 wickets which was his first ever 10 for in a match. Ashwin moved to 400 wickets in just 77 matches. Both had historic moments in the game.

After the match, Hardik Pandya was having a light hearted interview with Axar Patel. The first question Patel was asked that – Do you find test cricket easy? ( in a sarcastic tone) However, the bowler quipped that nothing comes easy and this is just good phase that he has taken so many wickets.

Also, Patel was enquired how did he feel when close to 50 thousand fans cheered by screaming his name, every time he came to bowl? The leftie spinner replied that its always so great to hear his name by everyone present in the stadium. Its even better feeling when the crowd is local.

The interview was about to end when Virat Kohli intervened in the conversation. He took the mike from Pandya and cheekily said to Axar –  “Ae bapu thari bowling kamaal che”

This was a banter by the Indian skipper to his newest team mate. Axar Patel is fondly known as bapu amongst his team mates.

What Kohli said in Gujarati literally meant, hey mate your bowling is great! Both Hardik and Axar bust into laughter when Kohli said these words.

This incident was funny to watch even as a fan. We can hope the Indian team provides many more instances like this for their fans.

watch the video of this scene, here!

DO NOT MISS: @hardikpandya7 interviews man of the moment @akshar2026.👍👍 – By @RajalArora

Watch MS ‘Thala’ Dhoni gets out for a zero in first match. Leaves fans...