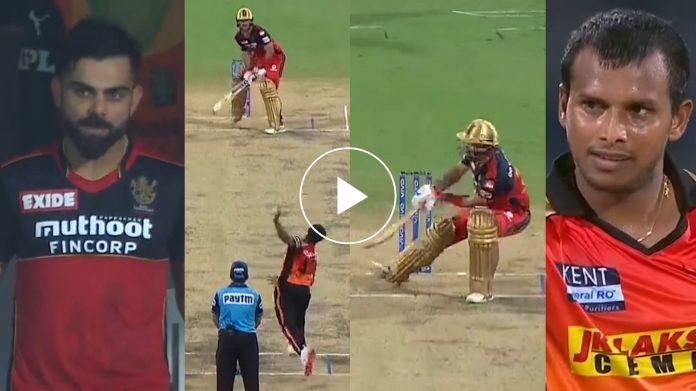 Glenn Maxwell has the ability and the reputation to play some incredible shots in the death overs. He can play scoops to fastest of bowlers and switch hits to spinners. This can totally change the line and length of the bowler and put him under immense pressure.

His habit of playing the out of text book shots to bowlers was again on display, today. Maxwell was batting and was well set, looking quite dangerous. It was the 19th over of the innings and Royal Challengers needed some quick runs. All their hopes were on Glenn Maxwell and his hits.

For Hyderabad, Yorker king and death overs specialist, T Natarajan was bowling. He was doing what he does best, which is bowling Yorkers after Yorkers. Maxwell knew that hitting Yorkers in a traditional way is next to impossible, unless one can play helicopter shots like MS Dhoni. So, he decided to take the unconventional route.

A scoop shot to Yorker

On the fourth ball of the over, Natarajan once again delivered a pin point Yorker to Maxwell. As soon as he bowled the delivery, Maxwell turned his stance in to a left hander. Then, like a good quality left hander batsman, he scooped it over short third man for a one bounce and into the fence for a four.

Such was the precision with which Maxwell hit the shot that the ball almost went for a six! The entire Royal Challengers team clapped at that shot from Maxwell. Even David Warner and T Natarajan could not quite believe at the sight from Glenn Maxwell.

It was the Maxwell of old of 2014. The season which made him an instant star of the Indian Premier League. The shots from the Australian batsman were in full flow and boundaries were hit in every corner of the ground.

Maxwell was dismissed on the last ball of Royal Challengers innings. He edged one to the wicket keeper Wridhiman Saha when he tried to launch the bowler out of the ground for a six. He finished his innings on 59 in 41 balls that included 3 sixes.

Watch a controversial moment. Ben Stokes almost run out but given not out by...