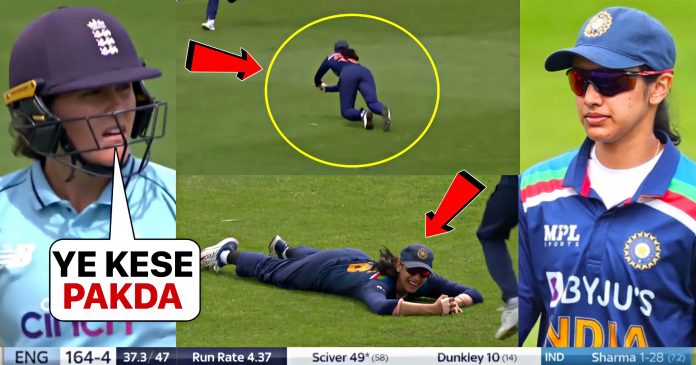 After winning the toss, Indian captain Mithali Raj elected to field first. Earlier the quota of overs were reduced to 47 from 50 due to the consistent rain that happened prior match. Hence, the match was started a bit late and to counter the loss of time, 3 overs were reduced.

The decision of bowling first proved to be great as Shikha Pandey struck in the second over of the match. Her victim was Tammy Beaumont who was caught in front of the wicket. After that the captain Heather Knight and other opener Lauren Winfield Hill added a valuable 67 runs for the second wicket.

It was Sneh Rana who got the wicket of Lauren who was caught by Pandey. The number 4 Nat Sciver made 49 runs as she frustrated the Indians. However just when she was looking to get to her fifty, she was dismissed when Smriti Mandhana took a sensational catch of her.

In the 38th over of the innings, off spinner Deepti Sharma was bowling to Nat Sciver. The latter was batting on 49 as she tried to reach his half century by playing an aggressive shot. Hence, she came down the track and hoicked the spinner to long on. Unfortunately for her, the shot was mistimed as the ball went up in the air.

As the ball travelled towards long on, Smriti Mandhana came running from the conventional position and dived full length to take the catch inches off the ground. Thus, it was a stunning fielding effort by the 24 year old opener.

With the wicket of Nat Sciver, the innings of England Women collapsed. Hence, from a score of 163-4, they were all out on 219 in 47 overs.

For India, the off spinner Deepti Sharma happened to be the most successful bowler. She took 3 wickets for 47 runs in 10 overs.