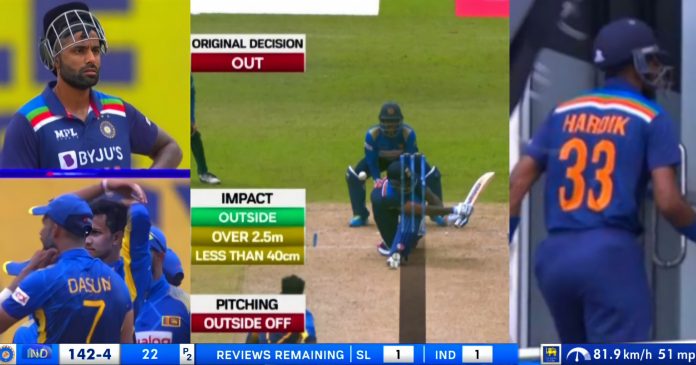 The Indian innings has got off to a flyer in the last match against Sri Lanka at Colombo at Premadasa Stadium. After winning the toss India decided to bat first. Dhawan said that it is a dry wicket so he would bat first and batting in second innings would be difficult. Both teams have gone with a lot of changes.

Shikhar Dhawan was the first to be dismissed. He made 13 runs including 3 fours in 11 balls. He was gone when trying to play an off drive.

He was dismissed by Shanaka. The batsman tried to flick it away fine but missed and was caught in front of the wicket. He missed his half century by just 1 run.

An interesting incident happened in the match. It was the 23rd over of the match and Jayawickrame was bowling to Surya Kumar Yadav. On the first ball the batsman tried to play a sweep. However he missed and the ball crashed in to his pads as he was given out. Yadav took a review and it was found that he impact was more than 2.5 metrs down the ground. So the ball-tracking was not needed as no one can be given out after more than 2.5 mtrs. Hence the umpire was forced to call the batsman back.