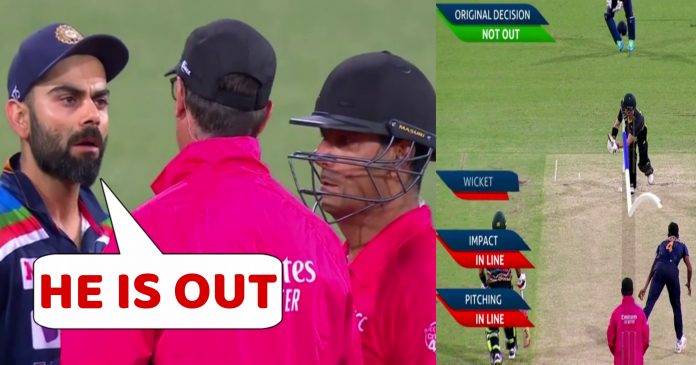 Indian skipper Virat Kohli was left frustrated after umpires deemed his review null and void during the third T20I against Australia.

During the 11th over in Australian innings, opener Matthew Wade was caught LBW in Natarajan’s bowling. However, the umpire gave notout as his decision. After consultation with bowler and KL Rahul, Kohli went for a review.

The umpires have asked the third umpire to review the decision. But the review was null and void as Kohli seems to have taken review seconds later than inside 15 seconds.

Also, Australian batsmen had pointed that the replays were on big screen when Virat Kohli asked for review. “They referred it off the big screen,” Wade was heard protesting to the square-leg umpire on Fox Cricket’s stump mic.

Ultimately the benefit of the doubt went to Australia. “We can’t go through this review anymore,” said Wilson- third umpire. “There are replays on the big screen. This is a null and void review.”

Virat Kohli had left fuming after the umpires explained him the situation.

Matthew Wade got a huge reprieve as he caught plumb. Had India took the decision to go for review, a couple of seconds earlier, Wade would have been in pavilion.

Here is the DRS graph if the review was successful

India wanted to review this

Meanwhile, Australia got to a strong total on the board after losing the toss. Once again Matthew Wade played excellent innings coming as an opener. He scored yet another impressive fifty.

Wade was the highest run scorer in the Australian innings with 80 runs from just 53 balls. On the other hand, Maxwell continued his power hitting once again. He shined with a good 54 runs from just 36 balls.

Australia managed to post an impressive 186/5 in their 20 overs on a wicket that slowed down as the match progressed. Having asked to score a massive 187, India lost KL Rahul early.

But Shikhar Dhawan and Virat Kohli stitched a good partnership of 74. However, Indian middle order failed once again as Virat merely got any support from other batters. The match is hanging in the balance at the time of writing.

Virat Kohli is going strong with Hardik Pandya new to the crease. Should India win this match, they will clean sweep their second T20 series in Australia in 4 years.