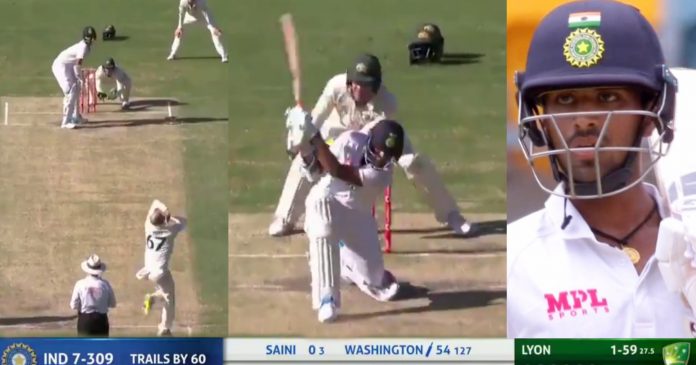 Indian cricketer Washington Sundar has announced his arrival into test cricket with some scintillating and resolute batting. After picking up three wickets, Washington came in at difficult circumstances.

The Indian middle order batsmen could not convert their starts and the team was reeling looking down the barrel. Sundar initially batted with Pant playing second fiddle. However, once Pant was dismissed India was looking at massive deficit.

But Sundar forged a brilliant partnership with Shardul Thakur. The duo defied the odds and put on a century stand. Thakur scored his maiden fifty before he got dismissed. Once Thakur was dismissed, the onus was on Sundar to play the major role for the reminder of the innings.

The talented all rounder then took on Lyon in the 104th over. After playing out the entire over, Australia brought the field up to ensure Sundar stayed off strike for the next over. Seeing the field come in to prevent a six, Sundar sat down and launched it over mid-on.

He didn’t even bother looking at his shot as the ball clearly sailed over the ropes. The term “no-look” six has been talked about in recent months and Sundar has just showed the prime example of a no look six in this innings.

Here is the no look six

Both Tahkur and Sundar helped India to inch closer to Australia’s total. Thakur scored an impressive 67 being the aggressor in the partnership. Meanwhile, Sundar scored 62 after fighting till the end.

He was dismissed by Hazlewood after trying to run the ball for a single on the final ball of the over. Some crucial runs by Mohammad Siraj at the end helped India reduce the deficit to just 33.

At one point, Australia were clearly looking at a lead of over 100 but India showed character. They fought their way back into the test match which has been the norm in this tour.

India continues to punch above their weight and impresses fans despite the setbacks. On the other hand, Navdeep Saini is back into the batting lineup and he is expected to bowl again after suffering a groin injury early on Day 1.