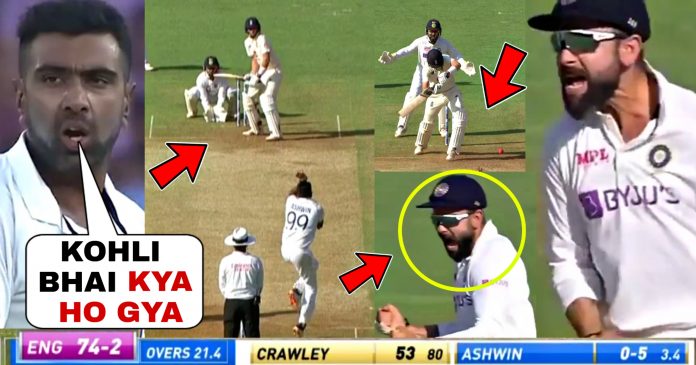 England received a massive blow in the ongoing third test match being played in Ahmedabad. India’s premier off spinner, Ravichandran Ashwin dismissed the English skipper for a cheap score of 17.

The captain came on to the crease after England had already lost their two wickets at the score of 27. With Crawley playing beautifully at other end, all Root had to do was to stay at the wicket. But he looked increasingly uncomfortable at the wicket with each passing delivery.

Ashwin cleverly exploited this by delivering a much fuller delivery. This was a bait to Root. The batter was standing back and had no chance to play that kind of ball.

As expected, the ball beat the defenses of Root and he was out plumb. Root however quickly took a review but more in hope rather than anticipation. The only question was whether the ball was going over the stumps.

The review clearly displayed that the ball was hitting the stumps and weren’t going over the stumps. Additionally, the review turned out to be umpire’s call.

In the end, Root went back to pavilion at the team score of 74 leaving England in a precarious position.

Indian skipper Virat Kohli was seen wildly celebrating his counterpart’s dismissal by involving in a chain saw style of celebration. The Australian great Brett Lee was the first one to come up with this style.

You can watch the dismissal of Root in this video :

Here is the Video of Virat Kohli Aggression:

Watch : Rishabh Pant gets emotional after losing his wicket on low score in...