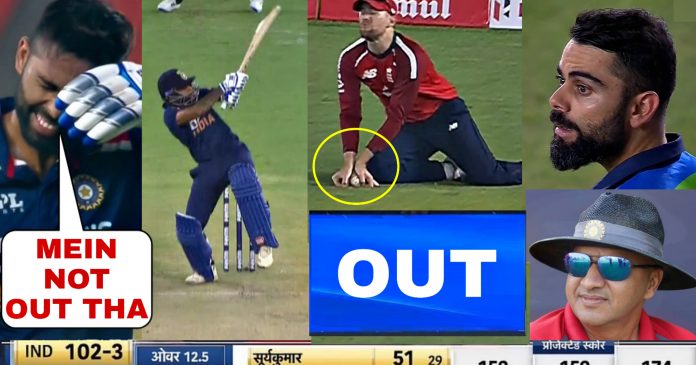 A shockingly wrong decision by the third umpire has created a stir on social media and the cricketing circles. This decision will go down as one of the poorest and horrible decision ever done by a third umpire.

The terrible moment happened when Surya Kumar Yadav was batting. Yadav, on the previous delivery had played a brilliant scoop shot for a six against left arm pacer Sam Curran, and was looking in ominous touch. Then something happened on the next ball, which invited a big controversy, and will kept on being talked about if India loses this game from here on.

Surya Kumar Yadav just like the previous delivery, played a scoop shot by sitting down on the knees. However, this time around the ball did not travel as far as Yadav would have liked. Instead, it travelled low and flat to the deep fine leg, where the fielder Dawid Malan was stationed.

Malan just dived forward and tried to take the catch. After he dived, there was a brief movement when it appeared that he had grassed the catch. It was clearly visible that the fielder had taken the ball cleanly, but in the process of completing the catch, the fingers were not in touch with the ball as it touched the ground.

However, the umpire overlooked this and gave his soft decision as Out. The decision went to the third umpire and it appeared, that this time the decision will be the correct one.

But in a shocking move, the third umpire Virender Sharma too gave it as OUT! The umpire watched repeated replays, of the catch and from all possible angles. However even after all this, he still thought that there aren’t enough evidences, to overturn the decision when ideally, it should have been given as Not Out.

Every one present in the stadium was, shell shocked. Virat Kohli made no secret of his displeasure as, his hand gestures suggested that he also thought that the catch, was grounded. Similiar reactions were there, from the other Indian players and commentators as well.

This decision was so horrible that it moved, even Surya Kumar Yadav to tears. Everyone then consoled him by patting him on the back, as he went back to the dug out of Indian team.

Naturally, there was a lot of anger, on social media by the fans and ex cricketers alike. They all unanimously thought that it was a not out decision.

Out or Not Out?
Tell us in the comments below! 👇