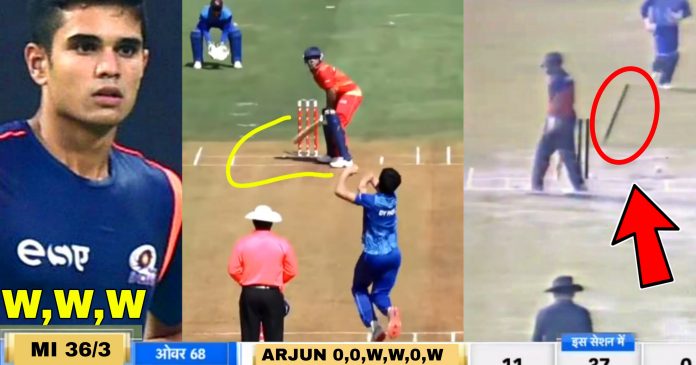 Who is Arjun Tendulkar?

The Tendulkar title in India’s cricketing circle is nothing short of Sacrosanct. Whenever the name Tendulkar comes up in the cricketing field, fans take notice no matter which generation they belong to.

Such is the aura of Sachin Tendulkar that anything, related to him becomes a news in cricket world. We have seen so much of him during his career of 24 years. His breathtaking batting which helped India win tons of matches in both test and ODI.

Tendulkar retired in 2013 but, we will watch another Tendulkar in 2021. He is none other than Sachin’s own son, the 21 year old Arjun Tendulkar.

Arjun Tendulkar is not like his father who was a specialist batsman. Instead Arjun is a left hand fast bowler who also bats a bit. It can be said that he is a left hand player, who is a bowling allrounder.

He made his debut in Syed Mushtaq Ali trophy, early this year in January for Mumbai against Haryana. In the game, he returned with figures of 3-0-34-1.The Junior Tendulkar played another game, but failed to pick up a wicket in his allotted overs.

Going into the auction, Tendulkar’s base price was set up at 20 lakhs and it was, interesting to see that Mumbai Indians bought him at his base price of 20 Lakhs.

Mahela Jayawardhane, the coach of Mumbai Indians said that picking Arjun Tendulkar was purely a tactical decision. It was based on skills of him and, just like everyone in the team,  he had to prove that he belonged at the highest level.

Arjun Tendulkar however is not totally out of touch with the highest level. He has been a net bowler for the Indian team in their recent tours.

Talking about Arjun, the director of cricket operations for Mumbai Indians team, Zaheer Khan said – “Arjun Tendulkar is a hard working and young kid. He likes to learn new things to improve on his skills and, should be left alone without mentioning the name of his father.”

Also, the Mumbai Indians team has had a history of picking raw and unknown players. They did well in the tournament while giving example of the Pandya Brothers and Jasprit Bumrah.

It can be safely assumed that in this year’s IPL, all eyes will definitely be on Mumbai Indians team playing eleven, and their inclusion of Arjun Tendulkar into the team.

Needless to say there will be a lot of pressure on Arjun Tendulkar to prove himself in front of the critics.

Here is a video of Arjun Tendulkar’s bowling and batting.

By looking in the video it is understandable that, Tendulkar’s average speed is around 132km-134km/82miles-83miles per hour. He can also swing the ball whenever the conditions are good enough for Swing.

Surely, Arjun can learn a lot from his Mumbai Indians team director Zaheer Khan. He was also a brilliant left hand bowler who, could swing the ball at a brisk pace of 85-87miles /137km-140km an hour in his heydays.