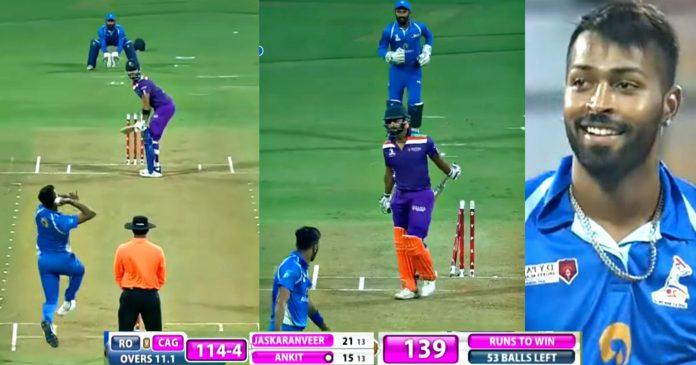 Hardik Pandya has been one of the best all rounders that played for India for few decades. The talented superstar can win games on his own and proved it time and again.

However, Hardik Pandya has suffered a few setbacks in his career especially due to injuries. He was forced to undergo surgery last year to put an end to his problems. After his surgery, Pandya took some time off and healed properly.

To ease his comeback into competitive cricket, Hardik Pandya chose DY Patil Cup 2020. He was planning in a way to sharpen his skills for IPL 2020 which was originally scheduled in March last year.

On his comeback, Hardik Pandya looked good after the back surgery. But Hardik looked sensational in his second game for Reliance 1. He put his all round skills in exhibition in one of the best displays in DY Patil Cup history.

After put into bat, Hardik Pandya scored an incredible 105 runs from just 39 balls against CAG. His innings featured 10 sixes and 8 fours as he ripped apart the opposition bowlers. His batting helped Reliance 1 post 252 for five in their 20 overs.

Little did CAG knew that Hardik Pandya is not yet finished for the day. Once Reliance 1 started bowling, Pandya inflicted more pain to CAG as he picked out 5 wickets. Hardik Pandya once again proved to be the match winner for the team he is playing.

Hardik Pandya since then made a comeback into Indian team. He played an impressive role in helping Mumbai Indians win their 5th IPL title. On his comeback to Indian team, he played some excellent knocks with the bat in T20I and ODI series against Australia.

He even managed to win the man of the series award for his batting exploits against Aussies in shortest format. After his impressive comeback, selectors have now given nod to include him in the squad for England series.

Pandya was selected in the squad for the first two tests against England. Although, it will be tough to break into the team right away, Pandya would be a huge addition to an already high flying Indian team. India are set to face England in the first test at Chennai from February 5th.

Watch the epic run out in last over that finished the game for Kolkata....