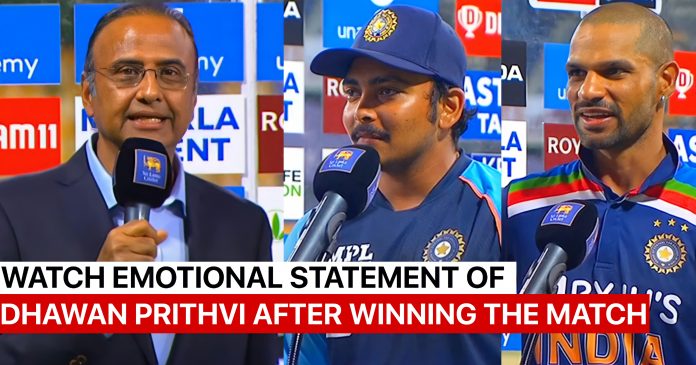 It was an easy victory for the Indians against the hosts Sri Lanka today. They won the first game easily by 7 wickets and took a 1-0 lead in the 3 match ODI series. All the Indian batsmen batted nicely on a flat wicket. The only player who missed out was Manish Pandey. Although even he made 26 runs before being dismissed.

While Shikhar Dhawan made an attractive 86 and remained not – out, Shaw was the wrecker in chief. The right handed batsman broke the back of Sri Lankan bowling with his aggressive stroke play and made 43 in 24 balls that included 9 fours.

After the match Dhawan was asked about the performance of his team as they won the match. To which he replied :

“All our boys are very mature as well as aggressive. They way they played today was tremendous and I am very happy. The way our spinners bowled, they brought us back, all three spinners, Chahal, Kuldeep and Krunal. It was good to be on the other end and watch Prithvi and Ishan. I was telling them to take it easy actually.

The way these young boys play in the IPL, they get lots of exposure and they just finished the game in the first 15 overs only. I thought about my hundred but there were not many runs left. When Surya came out to bat, I thought I need to improve my skills.”

Similarly Prithivi Shaw who was adjusted the man of the match also said a few things. This includes :

“It’s fine now, a bit of pain but it’s okay,” he says about the blow to the head. “Rahul sir didn’t say anything when I went in. I went with my instinct and was looking for boundaries. As a batsman, I try to keep the scoreboard ticking.

The pitch was good in the first innings and it got better in the second innings. And I like facing fast bowlers. I was disappointed with the shot when I got out. I lost a bit of focus after I was hit on the head.”

Watch their statements here in this video :