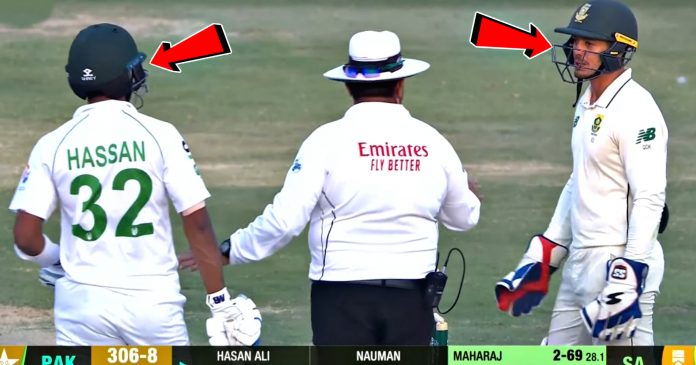 South African captain Quinton de Kock is usually a cool customer on a cricket field. He was never seen having a heated exchange from behind the stumps. However, all of this has changed in the first test against Pakistan when he had a minor fight with Pakistan player Hasan Ali.

The visitors have had a bad start with the bat but their pacers brought them right back into the match. But some excellent resilience from Pakistan lower middle order has helped the hosts to overcome the deficit.

As the second day went on, Pakistan continued to dominate the proceedings and put on a strong lead in the first innings. The Proteas bowlers start to wear a bit after having to toil an entire day with little return.

Coming to the incident, Hassan Ali was bowled out by Keshav Maharaj after the inside edge from the sweep castled the stumps. But replays suggested that Maharaj has overstepped and Hassan was reinstated.

de Kock got frustrated with the outcome and had a few words to say to Hassan Ali. The Pakistani bowler also had a go as the war of words was exchanged between the players. Soon both the on-field umpires had to intervene the tussle and the players went on with their usual business.

Here is the full fight video

Pakistan has managed to win the first test comfortably. South African batsmen has failed badly in the first innings. It is understandable that it is little difficult as none of the current team has ever toured Pakistan in their life times.

The hosts were able to make inroads early on first day and succumbed Proteas chances of winning the test match. Once Pakistan put up a good fight on the second day, there was only one outcome in this match.

South African batsmen need to up their game if their team wants to not lose the series in the second test match. Debutant Nauman Ali, at the age of 34, has proved his credentials by picking up 7 wickets.

He was very impressive in the second innings as he got his maiden five wicket haul. Pakistan will now play South Africa in the second test from February 4th at Rawalpindi.