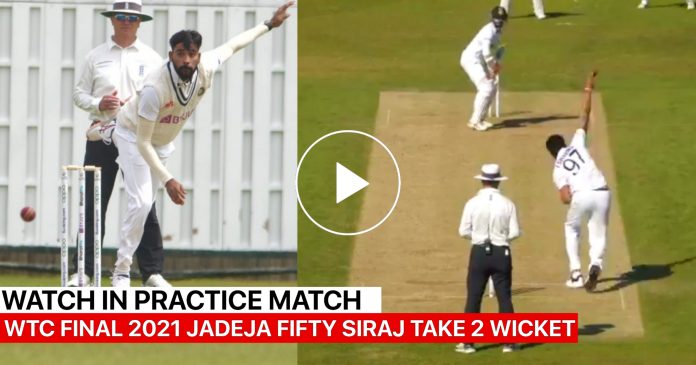 Ravindra Jadeja made a strong case for selection in the Indian playing 11 for the Finals vs the New Zealand. The left arm allrounder made a brisk half century as he remained unbeaten at 54* in 76 balls on day 3 of the intra squad practice match. For the bowling side, Mohammad Siraj continued his fine bowling form as he took 2 wickets for 22 runs and impressed the team management.

Currently, the only genuine all rounder in Indian team is Ravindra Jadeja, since Hardik Pandya is not a part of test team due to issues of dodgy back. Hence, Jadeja showing batting prowess in England would be a great news for Indian team and its fans. Since Ravichandran Ashwin is the leading spinner for India and is a certain starter for the final, it will be interesting to see if Jadeja too is included in the side.

The BCCI posted a small video containing excerpt of the 3rd day of the intra squad practice match. Jadeja can be seen batting against Ishant Sharma and playing a quality cover drive. Moreover, today is the last day of the 4 day practice match as Indian team looks to iron out their flaws and be match ready for the final. India will face New Zealand in Ageas Bowl, Southampton from 18 June. India’s opponent New Zealand has already shown their ability as they thrashed home side England by 8 wickets in the second test. Consequently, they won the match and the series by 1-0.

How will be pitch for the final?

Meanwhile, the focus now shifts on the pitch for the all important final. The head groundsman of the Ageas bowl stadium, Simon Lee told that he will be preparing a pitch that will have all the ingredients for a mouth watering clash.

“Pitch preparation for this Test is a little simpler as we are a neutral venue. (Hence) we are guided by the ICC, but we all want is a good pitch that offers an even contest between the teams. For me personally I just want to get something out that has some pace, bounce and carry in the pitch. So if we produce a pitch that allows the players to show their skills at the top level. (Consequently) we have an entertaining game for the fans, we will be more than satisfied”. (Lee told sports website ESPN Cricinfo).

The fourth and final day of India’s intra squad practice game will begin at 3:30pm(IST).

.@imjadeja gets to his half-century (54* off 76) as play on Day 3 of the intra-squad match simulation comes to end.@mdsirajofficial is amongst wickets with figures of 2/22.#TeamIndia pic.twitter.com/3tIBTGsD3L

Watch Emotional statement of Rohit after Loss vs DC Gives shocking information on his...