Mumbai Indians pacer Jasprit Bumrah was seen in joyful moods ahead of the mega event. The talented bowler is one of the cornerstones for Mumbai’s success since his debut in 2013.

His versatility with the ball made him one of the most dangerous bowlers in contemporary cricket. On the other hand, his unconventional action has played dividends for his success as batsmen still find it hard to face Bumrah.

The 26-year old will once again be the spear head for Mumbai’s bowling unit this season. With the absence of Lasith Malinga, they will be an added responsibility on his shoulders. He will be keen to regain his full form before IPL begins.

Bumrah is seen bowling in the net practice session. He was visibly happy and tried to imitate few bowling actions. Mumbai Indians twitter handle posed a challenge to the fans by capturing this video.

They asked who are the six bowlers that Jasprit Bumrah tried to copy in the video. However, it is very tough for even the ardent cricket fans as most of them looked alike. But a few close guesses would be Shane Warne, Anil Kumble and Zaheer Khan. But the other three actions are tough to even guess. So lets see if anyone of you can get all the six answers correct.

Here is the video of Bumrah copying different bowling actions

📹 Can you guess all 6️⃣ bowlers Boom is trying to imitate? 🤔

Jasprit Bumrah have not played much cricket since the world cup last summer. After the tournament, he was declared injured and was sidelined for few months.

He recovered to his fullest and was selected for the New Zealand tour. But the match winner did not replicate his form prior to the injury. He showed signs of rustiness in the series where India were left clueless in ODI and Test series.

However, the corona break would have surely helped Bumrah to get back into his groove. He is one of the key players for Mumbai this season, if they want to retain the title. The team are eager to take up the challenge.

Playing in UAE meant that no side will have a significant home advantage. All the teams also brought players keeping in mind that IPL 2020 will take place in India. But with this crisis, teams have to readjust their tactics and personnel for IPL 2020. The tournament will begin on September 19. Mumbai Indians are scheduled to take on Chennai Super Kings in the curtain raiser. 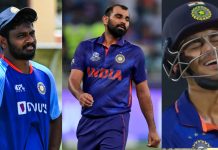