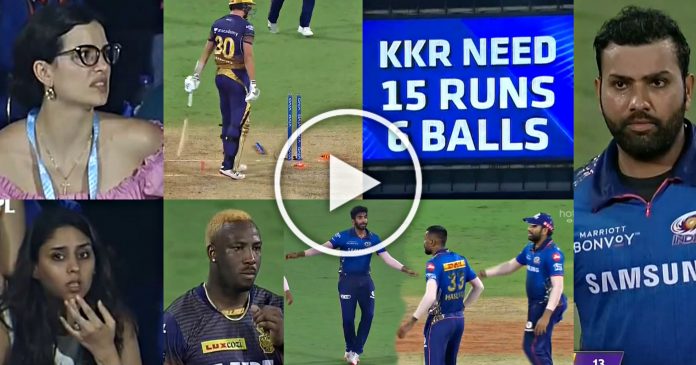 Mumbai Indians defeated Kolkata Knight Riders by 10 runs in a see saw game to register their first victory of the season. Chasing a modest 153, Kolkata could only manage 142 in their allotted 20 overs.

Trent Boult bowled an amazing last over to win the game for Mumbai Indians. He gave just 4 runs in the final over as Mumbai completed a come from behind victory in the match.

Boult came to bowl the last over when 15 runs were remaining to win by Kolkata. Their two finishers and hitters Andre Russel and Dinesh Karthik were at the crease. A slight error in line or length would have resulted in a boundary.

But Trent Boult made sure none of that happened. He came out with flying colors in the clash of him and the two finishers.

The first ball of the last over was a slower delivery. Andre Russel could only hit it as far as short fine leg and only a single came.

Dinesh Karthik too could not do any better and his attempt at ramp shot ended to the short third man for a single.

The next ball was a decisive one. Setting the field for a short one, Boult bowled a Yorker to Andre Russel. The batsman had no option other than to defend but he failed miserably. The ball sneaked under his bat and he was clean bowled.

It was game over for Kolkata in all likelihood. Pat Cummins who faced the next ball was also cleaned up by a great Yorker.

Two wickets in two balls had left Kolkata needing 13 to win. Harbhajan Singh could only take a brace on the fifth ball of the over. The game was finished for Kolkata.

On the last ball, Boult bowled a full toss. Harbhajan could only edge it on the bounce to the wicket keeper Quinton De Kock. It was a dot ball as Mumbai won the match by 10 runs.

Watch the video of last over here: