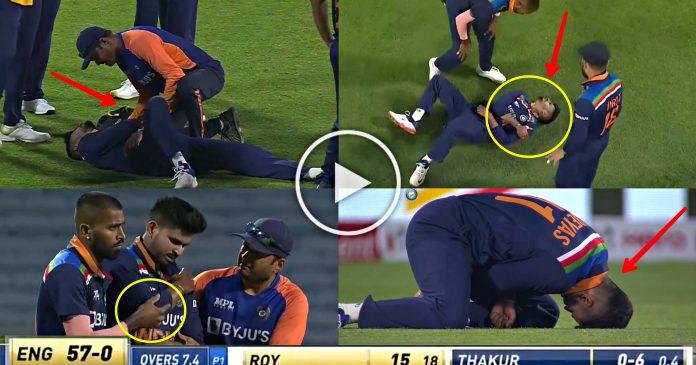 In a disastrous blow to India, the designated number four Shreyas Iyer could be out of entire season. In a freak injury case, Iyer seems to have dislocated his shoulder. Though he has been taken for scans, it appears that the injury is serious.

The incident happened during eight over of the second innings. England had got off to a brilliant start as the openers laid into the Indian bowling.

That is when Shardul Thakur was bowling to opener Jonny Bairstow. The batsman hit a drive towards covers where Iyer was fielding. To stop the ball, Shreyas Iyer dived full length but failed to stop the ball as it beat his dive.

It was while diving that he landed totally awkward on his left shoulder. He immediately cried in pain as he held his shoulder and looked to be in agony and immense discomfort.

Immediately the physio was called in and he took Iyer out of the ground. While Iyer could not do much with the bat as just made 8 runs, his fielding is world class. Its the fielding with which he could have saved many a runs.

“Shreyas Iyer subluxated his left shoulder in the 8th over while fielding. He has been taken for further scans and won’t take any further part in the game,” Was the official update from the medical team of BCCI.

In worst cases, a surgery is required to treat the dislocation. Whereas the subluxation can be treated with a rest of few weeks. A surgery takes few months to heal.

If Iyer is out injured, this would mean that he is ruled out of IPL starting from next month. Since, he is the captain of his franchise Delhi Capitals, there is an extra responsibility on him.

Im any case, the freak injury has come at a wrong time for Iyer. Due to a lot of competition for the spot in playing eleven, any spot once vacated would be hard to take back.

Watch the video of injury here: