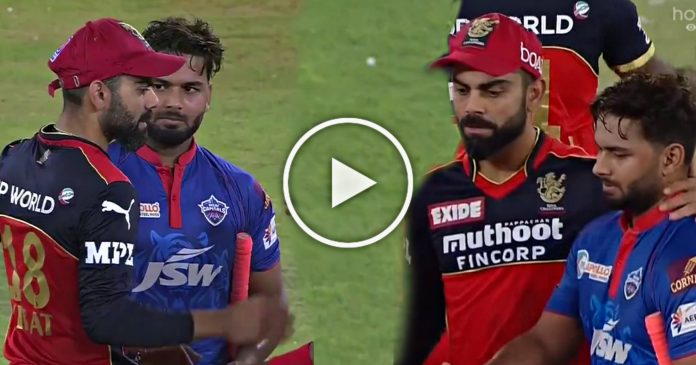 Bangalore successfully defended a target of 171 runs in a nail biting encounter against Delhi Capitals. It was a thrilling game with the last over being edge of the seat stuff. In the last over, Delhi Capitals required 14 runs to win the match. Rishabh Pant and Shimron Hetmyer were batting. For Bangalore, the task of defending the target was given to Mohammad Siraj by its skipper Virat Kohli.

Siraj, too proved that the confidence of his captain on him was no false assumption. He did bowl with supreme skills to effect a victory for his team.

Rishabh Pant was batting on the last ball when Delhi Capitals required 6 runs to win on the last ball. With the kind of form he has been, it did not look difficult for Pant to hit the winning runs. But, he missed his target as Royal Challengers Bangalore’s bowler Mohammad Siraj held his nerve and conceded only a boundary on the last ball to win it for RCB.

Pant and Kohli in conversation

Naturally, after the match, Pant was thoroughly disappointed. Pant was on mic, right after the innings was completed. He said ” Obviously I am feeling disappointed, specially when you have lost the game. The Royal Challengers Bangalore got 10-15 runs extra on this wicket. Hetmyer played a brilliant innings and it was because of him, we got close to the target. When it was the last over, we were thinking whoever, gets the strike, has to finish the job for the team and achieve the target.

Also, post the match, the captains of their respective teams Virat Kohli and Rishabh Pant were seen talking to each other. They were smiling and Kohli was appreciating the innings played by Pant as he tried his level best to win it for his team. However, he could nail the final blow and lost the match.

So, Kohli was giving tips to Pant on how to play in such situations. He also said few things about how to calculate things under a run chase, full of pressure and which bowlers should be targeted and who should be respected.

Watch: Most Shocking Runout in Cricket History in BBL 2021