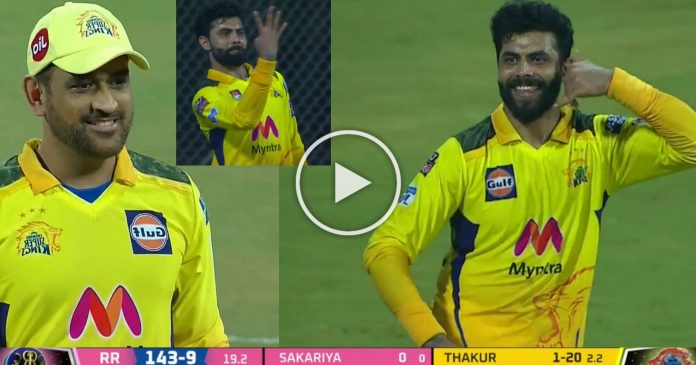 Ravindra Jadeja gave an epic all round performance yesterday in the match against Rajasthan Royals. The left hander from Gujarat starred with thr bat, ball and in the field. While batting, Jadeja scored only 8 runs as he perished while trying to hit big runs. 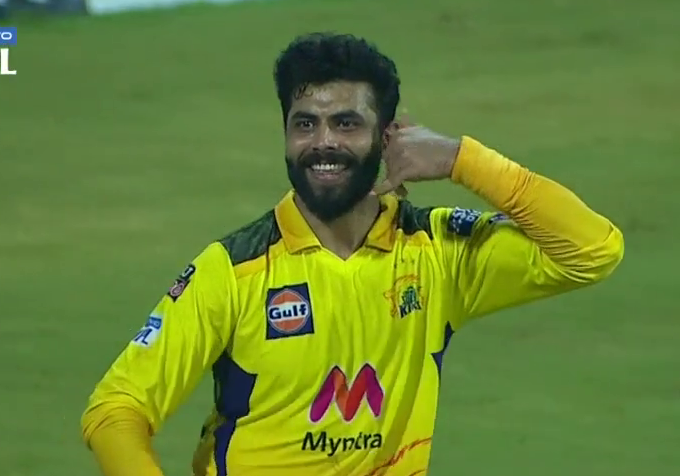 However it was his bowling and fielding that once again stood out. E reminded the fact that he is still India’s best all rounder who can contribute equally with bat ball and field. While bowling, Ravi Jadeja took two wickets and give 28 runs. But, the allrounder was electrifying in the field as he took 4 catches.

After completing his fourth catch, Jadeja did a funny celebration, which will be remembered by the Chennai fans for a, long time to come.

Jadeja took the catches of Manan Vohra, Chris Morris, Riyan Parag and Jaydev Unadkat. It was after completing the catch of Jaidev Unadkat, who was the 9th wicket to fall for Rajasthan that Jadeja, did a funny sort of celebration.

it was the last over of the match.

The match had slipped out of Rajasthan hand long way before. The last over was just a formality as, Rajasthan required 52 runs and 2 wickets in hand. Shardul Thakur was bowling to Jaydev Unadkat and Chetan Sakaria.

The first ball Thakur bowled to Unadkat was hit for four. It was a fortune boundary as it came via an outside edge. After that, Thakur bowled two consecutive wide deliveries. Then on the next legal delivery, Thakur struck. He bowled a slower delivery and Unadkat again try to throw  the kitchen sink at it.

However the ball hit the toe end of the bat and was, easily pouched by Ravindra Jadeja fielding at point. As soon as Jadeja took the catch, he did the celebration which was pretty similar to South Africa’s Tabraiz Shamsi’s celebration.

He started doing the phone call celebration as if it wasn’t his palm but a phone. He then dialled four and showed four fingers. It signified that not only has taken four catches but also, that the fourth title for Chennai is coming.

We all know that Chennai is second most successful team in IPL after Mumbai with three titles to their name. It was a very funny celebration and fans also loved it.

Watch the video of the celebration here: